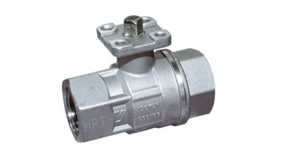 What are process ball valves?

Process ball valves are typically used in industrial applications, providing reliable leak-proof protection. They can be used manually, pneumatically or electrically and are manufactured in a variety of construction materials. Continue reading to find out all you need to know about ball valves.

What is a process ball valve?

A ball valve is a shut-off valve that manages flow measurement and control of liquids, vapours and gases into a piping system by rotating the ball inside. A process ball valve normally refers to a ball valve installed as part of instrumentation systems and processes in industrial facilities that support natural gas and oil distribution.

The ball inside is mounted against two seats in a shaft that connects to a control mechanism that rotates the ball. When the handle is parallel to the pipe, the flow is open and allows fluid through from the valve. When it is perpendicular to the pipe, fluid is prevented from flowing through. When open, the fluid flow rate depends on the area of the bore exposed to the fluid.

Parts of a ball valve

There are five basic elements that make up a process ball valve. They are:

The housing, sometimes referred to as the body, contains all of the internal parts of the process ball valve. It is typically made of hard metal, thermoplastic or thermoplastic-lined metal that protects everything inside.

The shaft connects the ball to the control mechanism, which is used to rotate the ball. With the use of O-rings and packing rings, the shaft and bonnet are sealed tightly, which helps to avoid any leakages. The shaft can be manually operated or controlled by a hydraulic, pneumatic or electric action.

The bonnet is part of the housing that is used to protect the shaft and its packing. It can be welded or bolted to the body and covers the opening made from connecting the shaft to the control mechanism.

The ball has a hole in its centre which is called a bore. This serves as the opening for fluid to flow through. When turned in the other direction, the fluid is prevented from working its way through. The process ball valve could be solid or hollow, with the former having a constant opening diameter, which helps fluid to smoothly flow at a constant velocity.

When the ball is hollow, the space inside it allows more fluid to pass through the valve, but the hollow ball creates higher velocities. It is more lightweight than a solid ball, and cheaper too.

There are many different types of process ball valves, and they can be classified according to their housing, ball valve, and bore profile.

A one-piece ball valve has a single-piece body that houses the internal components, which eliminates the risk of leakage of the fluid. They are the cheapest ball valves and always have a reduced bore.

Split-body ball valves are assembled on the side of their balls and are either a two-piece or a three-piece. The two-piece consists of housing divided into two pieces and fitted together. The main section houses the ball and a connection to one end, while the other holds the internal components and connects to the other end. Two-piece ball valves are the most commonly used type of process ball valve because they can be disassembled for cleaning and maintenance.

In a three-piece ball valve, the housing and internal components are bolted together at its two ends, and then threaded and welded to the pipe. They can be cleaned and serviced easily which make them popular in the food and beverage, and pharmaceutical industries.

Top entry ball valves allow access to the internals by removing the bonnet on top of the valve. This allows maintenance of the internal components without the need to remove the ball valve from the pipe.

There are three types of process ball valves associated with the design of the ball itself, and they are: floating, trunnion and vented. The floating ball valve is the most common design used. The ball is suspended and free to move in a lateral direction when the valve is closed. When opened, the shaft connection to the slot at the top of the ball prevents the ball from moving.

In a trunnion ball valve, the ball is supported by a shaft at the bottom, which is called a trunnion. This holds the ball in place and restricts its movement to its axis. The ball can only move if the valve shaft rotates.

A vented ball valve works the same way as a standard ball valve, except the vented ball has small orifices drilled into its side. When the valve is closed, the orifice is directed to the outlet side of the valve. The drilled hole is used to vent trapped gases which causes a build-up of internal pressure inside the valve, preventing leakage, failure and explosion.

A full bore has a diameter similar to the pipe diameter. Flow resistance is very low as the area for the fluid remains constant. Also, minimal friction loss is encountered during the fluid flow, meaning that the pressure drop is low. Pumping becomes difficult if there’s a high pressure drop, but since the bore diameter matches the size of the pipe, it requires a larger ball size and housing, which makes it more expensive.

A reduced bore – more common than a full bore – has a diameter that is smaller than the pipe size. It means the flow area for the fluid becomes narrower at the downstream outlet, which results in frictional losses and a pressure drop. Due to a constant flow discharge, the velocity increases with the decrease in flow area.

At Fluid Controls, we are a distributor of high quality pressure control equipment to the Oil and Gas industries. Since our birth in 1988, we have grown considerably, adding strength to our portfolio and establishing ourselves as preferred suppliers to many world-leading manufacturers and blue chip companies. Specialists in pressure management, Fluid Controls supplies to a broad range of industries, and we are now one of the UK’s leading distributors for pressure control.

What are the different ball valve types? Ball valves are extremely popular in an industrial setting because of their ease of use and simplicity to maintain. They can be manually operated or controlled by pneumatic, hydraulic or electric actuation, and are used to control and manage the fluid flow rate of vapours, liquids and gases. There... Read More
How do ball valves work? A process ball valve is used in industrial settings to manage the flow measurement and control of liquids, gases and vapours into a piping system. They’re incredibly important for the control of fluids in a process system. So, how do ball valves work? Continue reading to discover everything you need... Read More
What is process control? Process control covers a variety of disciplines and technologies. It could be mass flow, pressure, fluid flow, temperature or position. Principles of process control follow the same rules of measurement followed by adjustment of a process variable to maintain control of the process. The more accurate... Read More
What are process ball valves? Process ball valves are typically used in industrial applications, providing reliable leak-proof protection. They can be used manually, pneumatically or electrically and are manufactured in a variety of construction materials. Continue reading to find out all you need to know about ball valves. What... Read More
How Bürkert's FLOWave works Fluid Control experts Bürkert revolutionised the flowmeter market with the introduction of their FLOWave flowmeter. This game-changing device harnesses surface acoustic waves (SAWs), similar to those found in earthquakes, to deliver highly accurate flow measurements. Here, Fluid Controls explains... Read More